Yeayyyyyy!!
My man is back for Season 5!
None other than, Zachary Levi, of course.

I was totally waiting for the new season, because the last thing that happened during Season 4 finale, was that Morgan downloaded the intersect into his head, and survived.
Hence, it is expected that Morgan to be the hero in this fifth season. 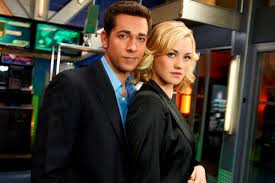 But somehow I was a bit disappointed with this premier episode.
I hate the new plot of the bad guy which unlike the usual world-domination, this time it is to make sure Chuck fails in everything.
Sigh..
So, where's the fun in that?
You know how I love Chuck.
How can I ever watch something with evil scheme to bring him down.

Bummer.. now I'm not looking forward anymore to the next episode.
Hate this evil plot!
(pics googled from the net)
Lots of hugs & muahhss from Jelita78 at approximately 10:01 pm