What difference does it make?

I'm putting myself on the stage here.
This is a very risky topic.
I know.
But, I just had to let it out.
I'm the open minded type.
The type that will speak out when I feel the need to.

I know this came too late.
I should have just fired it up at that particular instance.
But somehow my mind was too occupied with work at that time and just couldn't blurted out my come-back points.
A dear colleague of mine was carrying a fake Coach bag to work and somehow challenged me to identify the authenticity of it, right in front of everybody.
I'm not gonna elaborate what happened then, but now I realised I was being too polite to have kept my silence.

If I was given the chance to turn back the clock, I would have said;

"How do you feel about your 8 year old daughter working in a dirty-crowded factory, sleeping on the cold cement floor with other children, getting raped and molested, just for $60 bucks per month to sew and glue together fake luxury-brand handbags?"
No, I'm not making this up.
This is real.
This is what's behind the production of fake bags.
You don't have to go to Guangzhou to see it for yourself.
Just google it up and try to get it into your thick skull, that this is a serious matter.
Not just a gossip whispered from ear to ear. 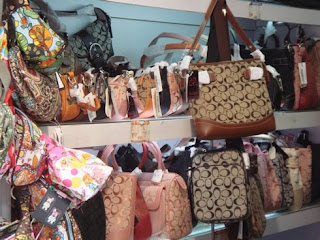 (picture taken from here)
Don't get me wrong, I am not implying that you have to eat oats daily, drink plain water, use clothes inherited from your siblings and wear flip flops to work, just to save thousands of dollars to buy a Coach handbag!
What I'm saying is, don't buy fakes! (and let alone be proud flaunting it!)
Even if it is a fake of non-luxury brand (such as Guess, Fossil or Quicksilver), it is still a FAKE!
And behind the productions for fake products are all the same!
Yes, not just fake handbags, even fake clothes, shoes, accessories and even CD/ DVD too!
They're all using children, underpaid, and the profit goes to funding crime syndicates. 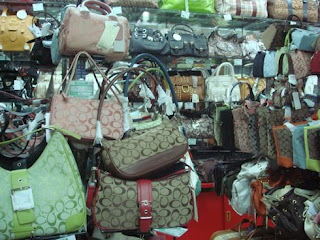 (picture taken from here)
Vinci, Nose, and Memory Lane crafts shop sells beautiful bags.
Even the pharmacy stores have cute canvas totes for about $9.90 on the shelf.
Why can't you just get that instead?
I know you must be feeling so thrilled of getting a beautiful fake bag that has the logo prints at $50, and maybe you feel like you will not give any impact at all to the counterfeit industries because after all, this was just one purchase.
But have you thought that what if everybody on earth thinks like you?
Wouldn't this increase the fakes 'supply-chain'?
So, when will it end?
It's more noble to just use the recycle grocery enviro bag, rather than carrying a fake. 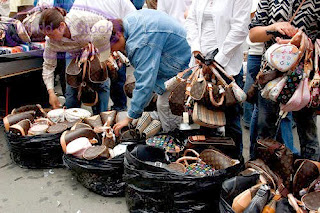 (picture taken from here)
No, I am not perfect either.
I bought a fake Coach bag in 2006, at a night market Batu Feringhi, Penang Island.
And I admit, at that time I was very naive and I didn't know about what's behind the productions of these fakes stuffs.
I'm not kidding, I really didn't know about it, nor did I bothered to google it either.
But what I remembered was that it lasted for only a month as the quality was very poor, and there went into the dustbin my $40 bucks fake Coach tote!  Yeah, it wasn't cheap either for a fake.

There you have it.
And since now you are a little smarter, and aware of what's behind all these, it's never too late to change!
Let's join forces to dry-up the supply-chain and drive the counterfeiters bankrupt!
Stop supporting fake bags!
We can make a difference!


p/s: special thanks to Dana NYTimes for such an inspiring article!
Lots of hugs & muahhss from Jelita78 at approximately 2:55 pm