Shame on you if you don't know who is MacGyver.
Seriously.
Go and download a series and watch it carefully.
Then you'll know why I badly worshipped him.
Bwahahhaa.. 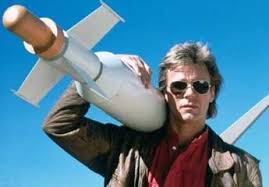 Yes, that mullet hairstyle just gets me every time!
Kinda have the Rod Stewart look, I must say.
Believe it, I considered him to be the most handsome and smartest man alive at that time.
Gone head over heels for MacGyver, and followed the series like a hawk! 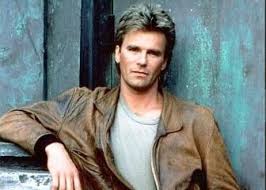 It's just plain fun to see the clever solutions MacGyver implemented using just the basic household items and with his ever so faithful red-swiss army knife, to get out of troubles.
It's like a different scientific breakthrough at each and every series.
And when science plus physics is involved, you can actually see the logic behind it and how it really works!
Who can get board with that?
Hmm.. did I just sounded like a geek?
Bwahahaha.. 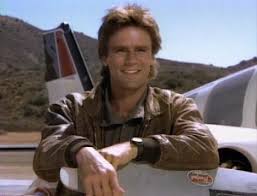 Ok, enough about that.
This post is to commemorate recent incident happened to me during an office seminar.
I was having a shoe malfunction to be exact.
My nike sneakers decided to stick out it's tongue at me.
LOL

Although Mr. Crab would have been very proud of me and my effort to try and walk, it was still a pain to do so.
So, what would MacGyver do?
After a few minutes of looking at my shoes instead of paying attention to the seminar, I just had this brilliant idea.
Thanks to Hj. Mus for helping me in locating these rubber bands.

After almost 20 years of his final series, I'm sure MacGyver will be very proud of me.
Bwahahhaha.

(MacGyver pics googled from the net)
Lots of hugs & muahhss from Jelita78 at approximately 9:52 am

Bonkers about me do it, tv / movie