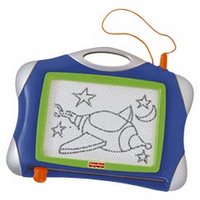 I am blessed with such a good boy.

After 23 days of Ramadhan, last night is the first night of tarawih prayer at the mosque for me. I have not been to the mosque at all this month because of Amin. I thought that he would make a scene there. Han is not here. He's outstation in JB for 3days and I'm left here with Amin. Since we're staying over at my mom's house which is about 50 metres from the mosque, I thought that heck, why not just bring him along and if things got worse, I can just quickly run home. So, I packed Amin with his Fisher Price Doodle-Pro, bottle water, napkin and off we went to the mosque. I hurriedly sat in a corner at the back end of the women's saf and placed Amin there.

He was such a good kid the entire time. He prayed right next to me (standing up and down by himself and pretend to recite quietly), sit at the corner and played with his drawing pad, the house key, the napkin, drink some water and after a while, started to mingle with other kids there. Yup, there's 1 baby girl curled up sleeping adorably on the carpet and there's her slightly bigger sister pretend to pray along with their mother. Afterwards, we went to join in the moreh and I guess Amin was hungry at that time as he easily swallowed 3 piece of jelly and a half cup of teh tarik.

I'm totally guilty of using Amin as the reason for not going to tarawih at the mosque all these while. Mommy so grateful to be blessed with you. Thank you, Amin.
Lots of hugs & muahhss from Jelita78 at approximately 9:30 am