Since I was a sucker for The Notebook, I said to hubby, "Ok.. why not.. lets watch"
After all, this movie is from the same best selling author, Nicholas Sparks. This romantic drama/war film stars Channing Tatum and Amanda Seyfried. It was released on February 5, 2010. Directed by Lasse Hallström, the film is an adaptation of Nicholas Sparks's novel of the same name. 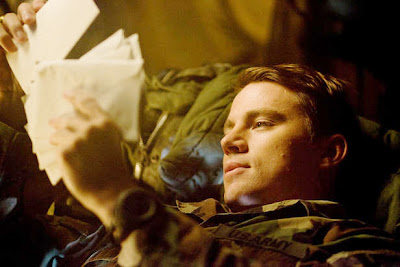 It follows the life of a soldier (Channing Tatum) after he falls in love with a young woman (Amanda Seyfried). They decided to exchange letters to each other after he is deployed to the war.
Kinda like a long distance relationship.. and over a long period of time too..

But the thing I got to learn from this movie is that about the love between a son and his father,  and the care for autism, which both are hardly to come by in movies.

If you think all love story is predictable, well guess again..
This one is different.
The unselfishness and the forgiveness are rather acceptable.
And of course, no need to predict, yes I cried too.


(pics googled from the net, info from wikipedia)
Lots of hugs & muahhss from Jelita78 at approximately 1:07 am