As I was about to save some files on my laptop, it suddenly prompted low disk space.
Then only I realised that I have tons of pictures in here, transferred from the camera since last year.
Knowing that it will take me a huge effort to look back at them after I transferred all into the external hard drive,  I figured I'm gonna make it my target this month to post all important events that I have failed to timely blog about, before I transferred the pictures out of this laptop. 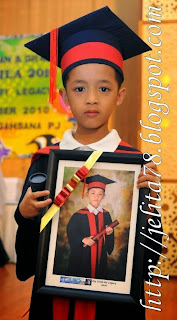 Salsabiila holds this Graduation ceremony at the end of each year which rotates between Sports Day and Performance Day.
And this last year was the Sports Day.
As for Amin, this was an extra special event because he officially graduated from the nursery.

Yup, believe it when I say that Salsabiila not kidding when it comes to graduation ceremony.
Just like the real university, complete with scroll, robe, hat and pre photo shoot session !


The event started as early as 8.30am, with just like any other sports day, to begin with the marching by all sports-house. 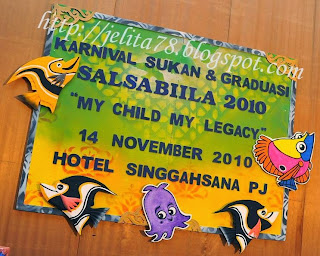 There were 4-coloured-sports  house; blue (both Amin & Arif), red, green and yellow.
The marching theme for this year was "Free Palestine". 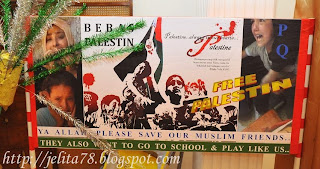 .. with Amin and team-mates preparing to march.. 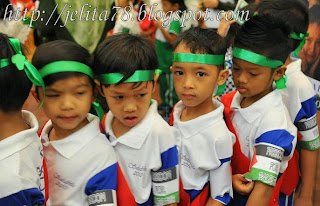 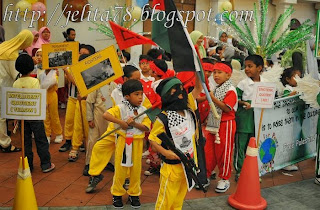 .. whilst the Green team, awaits.. 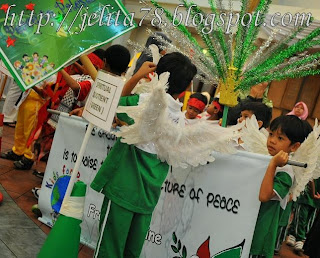 If I had known better, I would say that these children are fanatics and the concept is beyond their reasoning.
But let the truth be told that it's actually very fun to participate in such themed events and the kids really had fun dressing up to the cause.
After the marching, the fun continued with kids running around doing aerobics-dance--with-pompom-plus-marshal-art kinda choreographic.
Hmm.. very hard to interpret what was actually happening as I was busy laughing out loud seeing Amin doing this moves. 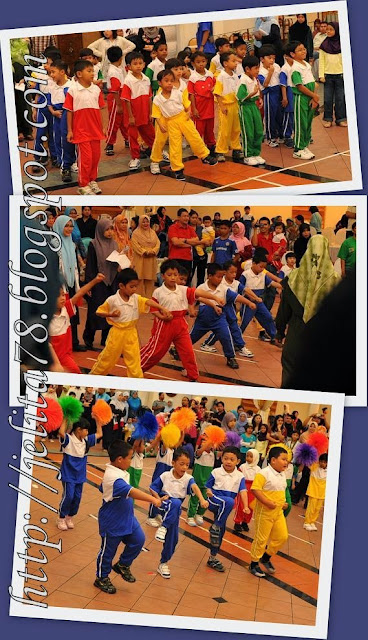 Then only the sporting activity begins.
Amin participated in several events, more like a mini decathlon.

My 2 year old Arif was not excluded too from the fun.
He participated in the lollipop event, whereby all 2 year olds lined up and run/ walk/ crawl/ however way they like, towards a plate filled with lollipop, took one, and stick it onto a sponge case.
Sounds simple, aye?
Well, for a 2 year old, it was not!
With kids screaming, crying, clinging to mommies, it was the most difficult game to conduct !!
But I am so proud for Arif who although looked at lost, he managed to walk towards the plate, hold onto a lolly drop it onto the case.
And the reward was that he got to eat it afterwards. Yeay!

We then reached the next agenda, which was the Graduation ceremony.
All 6 years old were called to the backstage to put on the robe and hat.

Lined up in a row, ready to take the scroll from the principal of Salsabiila and the honoured guest was Ustaz Ahmad Tarmizi, the winner for the Season 4 Akademi Al-Quran. 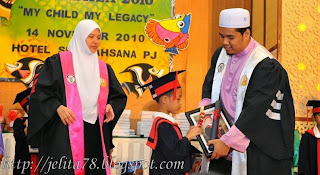 I'm totally a sucker for this moment.
It's hard for me to be happy and at the same time realised that my boy is now stepping into the real school environment. 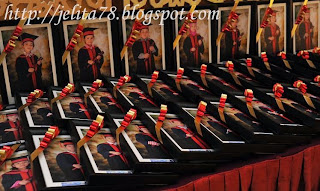 He is growing up so fast and I am thankful to Allah for all the motherhood experiences and moments that I have gone through.
Absolutely priceless.
Lots of hugs & muahhss from Jelita78 at approximately 8:25 pm