There should be a "Captain" in there somewhere 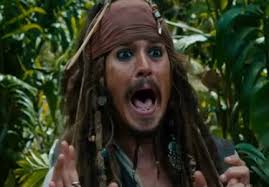 Unlike all previous series, this forth franchise was not directed by Gore Verbinski.
Rob Marshall took this one up and sorry to say, but I do feel like some scenes are just not relevant and actually not even needed at all.
For instance, the Spanish intervention.
It's really not that crucial to say the least as the Fountain of Youth could also be destroyed by the men fighting anyways, same approach, aye?


And what better way to finish off the 2 and a half hours movie date, other than dive into the Fountain of Ice Cream?

Thank you Acik Hajar for the wonderful outing!

(pics googled from the net)
Lots of hugs & muahhss from Jelita78 at approximately 11:35 pm