And I am not talking about this, or any kind of food either. 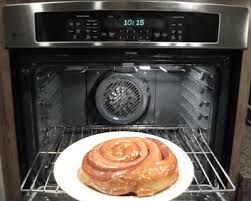 Hiyeee alls..
Hope you had a wonderful Eid and holidays with your loved ones.
Been meaning to update this before the Eid, but well, you know the drill..
So, here's the chronology event.

16th August 2011
Went to the panel clinic at work to check on myself because I was seriously late for my female-hormone 'cycle' which is big-a-deal to me considering that I am always on time, if you know what I mean.
And I've forgotten the last time I've had my period.
Was it June?
And Hunn said he never had an 'accident' before.
Dr.H ruled out that the urine pregnancy test result was negative.
And she said I could just be late in cycle because of the change in diet - since it was the middle of the fasting month by the way.

22nd August 2011
Went to the panel clinic at work, again, because another week has passed by and there's no sign of period or whatsoever, but coincidentally later the evening I did had a one-drop of blood on my panty liner.
Again, Dr.H ruled out that the urine test result as negative.
And sent me home with a urinal medication, in case if I might be having some infection in my urine as there was traces of blood.
Sigh.. 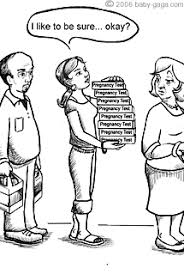 24th August 2011 - 9am
That's it!
I'm going to another panel clinic, this time near our housing area.
Because there's still not a single blood apart from that one and only tiny drop, two days ago.
I pee for the urine test.
Dr.N examined it using the same test strip as Dr.H at the office panel clinic.
But happily announcing it as positive!
WTH??
It is the same exact test strip used before, ok!
I knew it, there's something wrong with Dr.H and the way she's analysing the test strip.
Because I did see the 2 lines myself, by she kept telling me that it was negative because the second line was not that dark..?? Duhhh?? Seriously, she needs to have her eyes checked!
Anyway, since Dr.N has an ultrasound machine in the clinic, she straight away told me to lie down and to proceed with scan to be sure.
Indeed, she saw the sac, shaped like a half filled balloon, but after a few minutes of pressing and rolling the probe onto my lower belly part she apologizes to the fact that she couldn't find any heartbeat, at all.
Gasp.
Dr. N said that it could have been a missed abortion.
Gasp.
Meaning that when the embryo or fetus has died, but a miscarriage has not yet occurred.
It is also referred to as delayed or missed miscarriage.
She said my body might be late in 'discharging' it and immediately issued me a referral letter for me to go to a hospital gynae to get it 'flushed' out accordingly.
Gasp.
Yup.
There was absolutely nothing that I can say, or possibly described how I felt at that time.

Hubby having kept my gynae mobile number, Prof Siti, immediately gave her a call to set for an urgent appointment at 2pm.
We're not gonna delay this any longer.
After all, Eid was just around the corner.
Ohh.. bare in mind that both my parents were performing umrah at mecca and it's just me, hubby and friends at work worried sick after seeing me getting my medical GL- guarantee letter for the missed abortion gynae appointment.


24th August 2011 - 2pm
Met Prof Siti at UMSC.
She read the referral letter and said, "Hmm.. wait.. let ME do the scan"
Using the UMSC larger looking ultrasound machine and probe and screen.
And wallaaa!
There's the heartbeat.
Beating strong and fast.
And Prof Siti continued to blab about how precious life is and how hard people to get pregnant, and yet there's still many clinic doctors easily summarises for missed abortion.

So, ta-daaaa!
Here's the video of the bun cooking inside my oven, at the moment.
See the heartbeat??
It's like flickering very fast at the bottom of the sac.


Did you know that at 8 weeks old, the sac is actually the size of a tennis ball?
No wonder I feel fat throughout this fasting month.. huh!
And so much for hubby claiming never been in an 'accident'.. pffttt !
A good one, that is!
Bwahahaha!

(pics googled from the net, and the video is my very first video ever uploaded on youtube just for you!!)
Lots of hugs & muahhss from Jelita78 at approximately 7:40 pm