Believe it or not, I am demmm proud of it!
I am part of the almost-extinct-non-facebooking-people! hahaha
It's like almost everybody on earth has a facebook.

If you must know, nope, I am not living in a cave.
And yes, I am part of the executive working in corporate company and living in metropolitan city!
No, I am not retarded, thank you for asking.

So, what's stopping me from Facebook-ing?
Well, the answer is simple, I just don't want to! 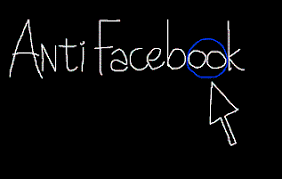 Don't get me wrong.
I don't hate it.
I am not anti-facebook.
And I don't have anything against those with facebook either.

I just choose not to have a facebook.
It is purely my choice.
I don't see the need for it.
And I can live happily without it.
I don't even have a friendster, or myspace, or whatever community link group, if you must know.
So, yeah, I don't plan on twittering either.

So, the next time somebody said that they do not have a facebook, don't shrieked like you've seen a ghost.
Because it is really O.K for not having one.
And at least, learn to respect their decision for it.

(all pictures were googled from the net)
Lots of hugs & muahhss from Jelita78 at approximately 1:14 am