No wonder it triumphed at the U.S. and Canadian box-offices with $65.8 million in just the opening weekend ticket sales!
The film is totally beyond expectations!
Perfect storyline.
Perfect setting.
Perfect crew.
Perfect body too! 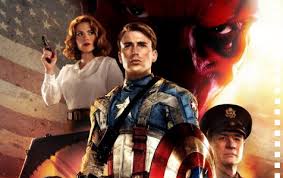 This movie is based on the Marvel Comics character, Captain America.
It is the fifth installment of the Marvel Cinematic Universe - of which the first four were Iron Man (2008), The Incredible Hulk (2008), Iron Man 2 (2010) and Thor (2011).
Directed by Joe Johnston, and stars Chris Evans as the Captain America, Tommy Lee Jones, Hugo Weaving and Hayley Atwell. 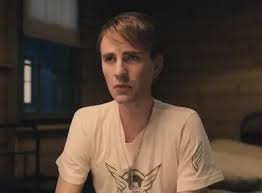 Plot dated back to the 40's, about a small-figured man with a big heart, determined to enter the army and help fight the war.

Faith has it that he was discovered by a scientist and put into a super-soldier program, transforming him into a physically-build shape. 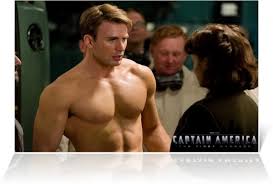 Crashed in the Artic during his quest while fighting the evil Schmidt.
Discovered 70 years later (today), still alive and bam! Joining the Avengers!
Don't you dare leave the cinema after the credits, ok!
Stay and watch the trailer for The Avengers - consist of Stark, Thor, Hulk and Black Widow!
Can't wait for May 2012 !!
Wuhuuuuu!!!

(pics and info googled from the net)
Lots of hugs & muahhss from Jelita78 at approximately 12:12 pm