Wow..
It has been a while since my last entry.. I almost forgot that I actually do have a blogspot.. haha


Hmm.. Let me recap where was I in my last entry..
Oh yes.. The job post that I've applied.. Well, guess what, I didn't get the post and let me tell you what happened to it. I called the manager of that post and she told me that her boss (the management) rejected my application, but she didn't know to what reason. So, without wasting my time, I went to see her boss, who is the assistant general manager of that division. My intention was to appeal to him and to prove that I'm the best candidate for that post. Heck, actually I don't have to tell him anything at all because he already knows me, he knows of my previous posts and what I have done before and what I am capable of doing. I even have the manager backing me up. It was a very easy job opening for me, at least that's what I thought. Anyway, I went and see this guy and he's a very nice guy indeed. He's actually more of a listener than a talker. I told him of all the things I've done since I first started working here in 2001 and what I have accomplished and what I have learnt and participated in et cetera et cetera.. blah blah blah. He listened to me with interests and after I've enthusiastically finished telling him everything, he calmly said "I want a marketing background staff. We already have too much engineering staffs here doing marketing and still cannot sell the products. I want somebody with marketing background, to sell it all". That's it. No matter what I said, or how much I tried to convince him, or how many marketing jobs I've done and participated throughout all these years, I still couldn't changed the fact that I was an engineering background student and have no education level of marketing at all. So, I thanked him for agreeing to see me and left his room. I was upset, devastated, but life goes on.


Next : Han called twice from Utah - which we later found out from his phone bills that his 4 minutes calls costs nearly RM100 !! The rates were not only charged by Celcom but also the US provider, that 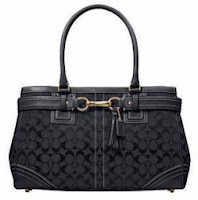 includes all the SMS rates too. What a total rip off!!

Anyway, Han came home safely a week later and bought me many many gifts! Yeay! He bought me a COACH handbag at the Factory Outlet near Utah. It's a COACH Hamptons Signature Perforated Business Tote Carryall, style number 8K07. At first, when he sms to inform me about it I was very sceptical and doubted his fashion senses. But when I saw the bag, I was stunned. I am seriously lucky to have married him. His taste in style is unquestionably perfect!
He bought me Victoria Secret bra and perfume and a couple of OshKosh cargo pants, t-shirts and baseball cap for Amin.. Oh so cuteee!

And as he also bought me Crocs Mary Jane, just like I wanted it, simple black. Which allows me to decorate mine and Amin's clogs (RM9.99 from Giant Supermarket :) ) with plenty of fashionable Jibbitz!

About our KD house, the interest fee has been waived up to 50%. It's still a lot to pay but we are thankful for it. So, we finally settled the RM5k ++ and took the house keys from the developer and visited the house. Oh my. I've never been this excited in a long time. My mind is filled with ideas on how to decorate the house. For the past few weeks, we have been calling up several contractors to come to the house and give us quotations on expending the kitchen area, kitchen cabinets, built in wardrobe and redo front porch roofing. I have surfed to numerous websites and thinking about it day and night and even popped into my dreams during my sleep! Oh, and not to mention about stopping our car in front of other people's houses just to look at their grilles! hehe.. About the budget, we are praying that the company stocks will increase its values so that we can sell our stocks and get the money from there. But unfortunately, now is not a good time as the market is kinda slumping down at the moment. So, I guess maybe it will be a while before we finally get the renovation done.
Lots of hugs & muahhss from Jelita78 at approximately 11:04 am No comments: