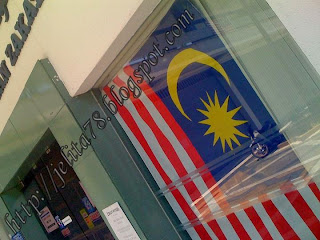 Once upon a time, there was this girl.
Every year in the month of August, she got struck with fascination towards the Malaysian flags.
She hanged them up around the balcony.
She rushed to the petrol station and grabbed a few mini-flags to tape it onto her bicycle, and onto her dad's and mom's car.. (which then, her dad scolded her because the tape got stuck onto the car and difficult to remove).
She used her mom's phone and text her relatives with happy independence day wishes, on the eve of independence.
She stayed up at night, waiting for the countdown telecast.
She dragged her aunts and cousins in the wee morning, to Dataran Merdeka to witness the annual parade.
(and when not, she woke up early to gawk at the parade on live TV streaming)
And, she kept doing the same thing, over again, same time, the year after.

There was once, her flags gone missing.
The ones she placed around the house gate, were gone in one night.
Then they found out that the drug addicts stole them all.
Not just hers, but flags from other houses around the neighborhood, and even those in schools, were stolen.
She cried.
Because it was her effort rummaging through the garbage, in searched of the broom sticks, to tie the flags, and knot them onto the gates.
And the drug addicts stole not only the flags, but together with the broom sticks !!

I was that girl.

I was not born during the era when the Malaysian fought for independence..
I was not even with parents who's related to army or government agencies..
But, I grew up, as a child, very much aware of what independence is to Malaysia..

I grew up with schoolmates who ran around the campus with flags shouting Merdeka! at the strike of midnight (this was during my years in boarding school).
I grew up debating which buildings in the city has the biggest Malaysian flags displayed.
I grew up with the feeling of excitement, celebrating the moment of joy of the Independence day.

Oh how I wish kids (and adults too) of today inherits such high spirits.
I miss those days... 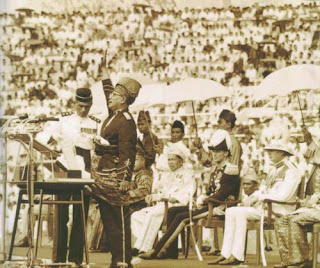 Lots of hugs & muahhss from Jelita78 at approximately 8:17 am